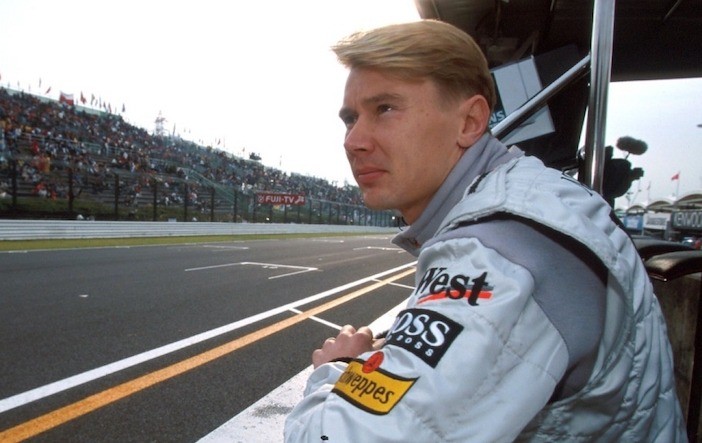 Little Mika often went to his father's work past the racetrack, and according to him, he became speed-addicted - engine sounds attracted him more and more. Parents helped him to buy his first kart when he was six years old, and he immediately had an accident. But "the first step is always troublesome." Because by age 18, he had won the national championship five times!
Then Mika switched to Formula Ford 1600, where Keke Rosberg, first Finnish Formula 1 champion, noticed him. He helped Hakkinen get into more powerful teams and series. Mika understood that - there are a lot of fast young pilots, but not everyone has a team.
However, Hakkinen did not let up a patron and future manager - for example, in the 1989 Formula-3 season, he won the championship with a 23 points handicap. By the way, second place was taken by Mika Salo.

Regarding his success, Mika Hakkinen got a chance to get into the "higher world" - he signed with Lotus in 1991. But it was not the great team that is still among the Top 5 Constructors' Champions. The victories are almost forgotten here. For example, when Mika and his team-mate both finished in the points-scoring position at the San Marino Grand Prix, it was the first time in three years. But Hakkinen got his goal - had an experience. Therefore, in 1992, he had already won 11 points against two in 1991.
In 1993, Ron Dennis called Mika to McLaren. And that was the beginning of the legendary journey. Beginning as a test pilot, Hakkinen replaced Michael Andretti at the end of the season and even managed to win his first podium. He also jokes on legendary Ayrton Senna when told that he was faster at the training because he has "bigger balls."

A career that could end

Seasons 1994, 1995, 1996 and 1997 was a mixed success for McLaren and Mika. Also, one negative event has happened then. At the 1995 Australian Grand Prix, during a training session, he had a terrible accident - the hit was so powerful that Mika got a skull fracture and fell into a coma for a day. But the doctors pulled him out. And he had to wear a hearing aid in his left ear since then. This injury also assumed as the main reason for his rather short career in the F1.
In 1997 "silver arrows" finally began to use Mercedes engines and finally go fast. For example, in the final race of the season, Mika won his first Formula-1 race, thanks to the clash of leaders Schumacher and Villeneuve!
By the way, their legendary rivalry with the "red baron" had already begun to appear. And most experts and fans agree that Hakkinen's championships are even more valuable because he defeated Schumacher. Just like the Schumacher's Championships even brighter thanks to their battles.

Champion who drove faster than Schumacher

Mika always drove fast. That's why his nickname was the Flying Finn. And in 1998 and 1999, he was able to prove it.
Hakkinen finally got a fast and reliable car and even said that only a miracle could prevent him from winning the championship with such a car. But the miracle had a Michael Schumacher's name, who lost his last season to Villeneuve and became impatient. Imagine that only 2 races from 16 was won by other pilots that year! Before the last Japanese Grand Prix, Hakkinen was 4 points ahead, but Schumacher took the pole. And then the accident had happened. By the way, Finn's critics say there were many such accidents and generally call his championship "accidental." But there is the fact - Prost-Peugeot pilot Jarno Trulli has stalled at the start grid, so the race management has scheduled a restart. And here the Ferrari's mechanics were not perfect - when the McLaren team guessed putting dry ice in the side pontoons, the Italians did not. As a result, Schumacher also stalled while warming up! And he started the race from the 22nd position instead of the first. Mika did not lose such a perfect chance and did not let anyone get close to him, taking his first championship!
The 1999 season was expected as a serious confrontation between Ferrari and McLaren and their first pilots. But it did not happen as expected - in the middle of the championship Michael got into an accident and broke both legs, returning only two races to the end. McLaren's cars were the fastest again, but Hakkinen himself gave the competitors a chance, making a stupid mistake on the track for several times. As a result, before the last race, he lost four points to Ferrari's pilot Eddie Irvine. And even though Irvine was behind Hakkinen on the starting grid, the pole was by Schumacher, who was not going to give a competitor a win so easily. However, the German could not hold the Finn for long - Mika beat Michael for five seconds at the finish, while Irvine was third. The second consecutive championship was in his pocket!
The next season was competitive by Hakkinen in name only. Schumacher had a handicap of up to 24 points during the season, and with four last wins became a champion. Mika was the second.
Season 2001 was even worse and the last for Hakkinen in Formula 1. Already at the first Grand Prix in Australia, he had an accident, and then a lot of people saw that Mika needed a break. Few finishes, bad results, and only fifth place.
After that, Hakkinen announced that he was retired from Formula 1. From 2005 to 2007, he drove in DTM but unsuccessful.